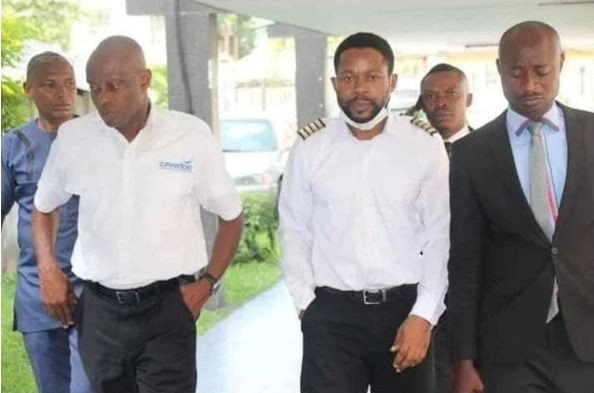 Air Operators of Nigeria (AON) on Wednesday April 8, threatened to stop all flights operations to Rivers State for three months if the Caverton Helicopters pilots who were remanded in prison following an arrest spearheaded by Governor Nyesom Wike, are not released.

Recall LIB reported earlier that the pilots were arrested and arraigned in court for violating the River State Government’s order on closure of borders and airspace following the outbreak of Coronavirus.

Chairman of AON, Captain Nogie Meggisson insisted that the arrest is unlawful since the airline had secured all necessary approvals from the Ministry of Aviation and the Nigerian Civil Aviation Authority (NCAA) for the flight in line with the protocols for exemption of Essential flights as issued by the NCAA.

“The Airline Operators of Nigeria (AON) hereby calls for the immediate release of two (2) Pilots of Caverton Helicopters that were recently arrested and taken into custody in handcuffs by the Rivers State Government for allegedly flouting the COVID19 Lockdown Order in the State.

“The Airline Operators Nigeria condemns the move in the strongest term and considers it very unlawful in the face of the fact that the airline had secured all necessary approvals from the Ministry of Aviation and the Nigerian Civil Aviation Authority (NCAA) for the flight in line with the protocols for exemption of Essential flights as issued by the NCAA.

“The AON also frowns at the crude action because the pilots were only doing their lawful duties which were also in line with President Muhammed Buhari’s Exemption Order of the Oil and Gas sector during the shutdown exercise.

“The Airline Operators of Nigeria hereby demands the immediate and unconditional release of the two pilots with all purported charges dropped so that they can go back to their families for the Easter holidays and return to their jobs.

“However, should the Rivers State Government fail to release the pilots within 24 hours, Airlines in the country will be forced to boycott all schedule and unscheduled commercial and private flight operations, including oil and gas offshore flight services, into Port Harcourt for a period of three (3) months.

“We, therefore, hope our appeal for the immediate release of the pilots within 24 hours will be heeded by Rivers State Government otherwise Airlines in the country will have no other option than to completely boycott all operations into Port Harcourt.”

This is coming after that the Minister of Aviation, Hadi Sirika disclosed that the Federal Government would do everything possible to ensure the release of the pilots and continued operation in the interest of the nation.